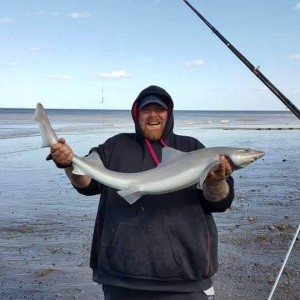 My name is Dave and I have been asked to share my story. I thought I’d try to find some statistics to show not only how rare penile cancer is, but how rare it is for a man my age. I found that there’s around 550 men diagnosed a year in the UK. Most of these men are over 60. 1 in 5 are under 40, which makes me a very rare case. I was 33 years old when I was diagnosed.

It was April 2014 when I first noticed a red spot on the head of my penis. It wasn’t getting any better, so my wife and I went to my GP, who thankfully didn’t diagnose a wart like many other penile cancer patients. I was sent to see a urologist who said I needed a biopsy. He did mention cancer, but seemed to dismiss it due to my age. However, two weeks after, we received the news it was cancer. Honestly, I was already suspecting the worst. The ulcer (which this little spot had developed into) which was removed for the biopsy, was growing rapidly and getting more painful by the day. No one in our area had the ability to treat me, so I was transferred to a hospital 65 miles from home.

On 3rd September 2014, I had a glansectomy and skin graft. Basically, the cancerous part of my penis was amputated, the skin graft was used to create a new head. They removed more than they anticipated too which was a shock. I had a catheter in for 3 weeks so the area would be kept clean and dry. The pain was ok, nothing compared to having the tumour. Sitting down to have a wee was something that took some getting used to, but now I have like a funnel so I can stand up and feel a bit more normal.

We received the news that I officially had G2 T2 squamous cell carcinoma, the most common of penile cancers, and that they hadn’t removed it all! I was deemed moderate to high risk of it spreading through my lymphatic system so 3 weeks later, I was having a sentinel lymph-node biopsy. It caused slight Lymphodema (hard swelling in my groin and tops of legs) but that passed after time. My body was exhausted after 2 surgeries in 2 months, plus the stress and worry of it all.

Two days before my daughters 12th birthday, my wife received a phone call to say everything came back negative. The cancer had gone!!!

I still am in pain some days, and as a family we have faced some tough times. We quickly adopted a positive attitude. It wasn’t going to beat us. There has been some very dark days, but we faced them head on and got past it. As a couple we were open and honest about every process and coped by laughing! We just took it all in our stride, and are even stronger together as a result.

So please, do not delay in getting yourself checked out if you think something is wrong. Yes it’s embarrassing, but its worth getting your tackle out if it means saving your life! Just because its rare, it doesn’t mean it can’t happen.