The penis is made up of different types of tissue including skin, muscle and nerves. It has a very rich blood supply so that it can become upright (an erection) during sexual activity. When sexually aroused, blood flow to the penis increases. Columns of special muscle tissue in the main body of the penis (erectile tissue) fill up with blood, and this makes the penis erect 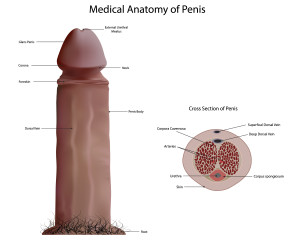