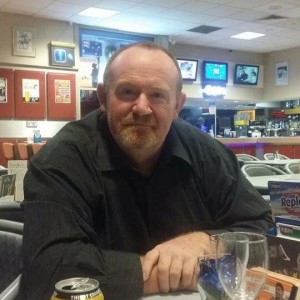 My name is Wayne and I am a 49-year-old male Penile cancer survivor. I would like to share my story with you, a story that like so many others in the past, I was once ashamed to share.

In early August 2013, I was referred to a dermatologist for this lesion which had spread beyond my GP’s control as he believed it to be skin cancer. In this same period, I also developed a small lesion on the base of my penis. During my visit to the dermatologist, he reviewed both lesions and followed through with a biopsy on my arm. However, he saw no link between the two and I was told it was a genital wart, at this time it was decided by the Specialist to concentrate on the lesion on my arm first and that he would treat the genital wart at a later date.

The following day, I received a positive result for SCC (squamous cell carcinoma) on my arm. The dermatologist suggested as the surgery was too large for him to deal with directly, I be referred to another specialist for the operation and ongoing treatment which included a skin graft.

Upon receiving this news, I was stressed and worried; I made another appointment to see my local GP to talk more about the cancer on my arm and to seek more advice about the “genital wart” on my penis. Again, though, I was assured it was just a wart and was prescribed ‘Wartec” cream and to use the cream on the genital wart as directed.

In late August 2013 I went to hospital to have the cancer removed from my arm. The skin graft was completed and a follow up treatment continued on for the next ten weeks or so.

Over the next 8 months I also visited the local doctor and dermatologist at least six more times regarding the wart on my penis as the cream was not working and it was getting larger.

Then in April 2014, eight months after my initial consultation with the dermatologist I was finally diagnosed with Bowens Disease, with invasive SCC. In short, it was Penile Cancer.

I was referred to a urologist who specialises in this form of cancer. I was told that I had to have penectomy due to the severity of my cancer growth.

I underwent a radical operation in June 2014 to remove the tumour from my body. A penectomy is the full amputation of the penis at the base, and I had to have a perineal urethrostomy – my urinal tract needed to be moved entirely and a small incision was done between my testicles and anus, allowing me to urinate. It’s safe to say in that moment, I felt as if every part of the being that made me a man was stripped of me. To this day, I am still embarrassed to go to the bathroom.

In August 2014, I had further complications and had to have a bilateral modified inguinal lymph node dissection – I had my groin lymph nodes removed completely. Since this, I have been diagnosed with stage 2 Lymphedema.

From the time I was given the diagnosis to this very day I have found very little in terms of support networks surrounding this kind of intrusive cancer. I have been limited in even hospitals, at doctors and online. Support networks are lacking for suffers of this cancer, as well as the people it affects secondarily like family members and loved ones and partners. There is little information on how to cope, what to do and how to handle it as a sufferer or the loved one of someone whom is suffering.

What we intend to do in the future is build some support around this form of cancer, and others like it. We’d like to raise much needed awareness to those who haven’t heard of penile cancer before, or to those who have but don’t have anybody to reach out to. We want people to know they aren’t alone. I have been knocked back by large charities when I asked about their support and awareness for penile cancer; to talk about such a taboo subject in such a public way seems to be too much for them. I’ll do it myself. The time has come for all sufferers and their families to stand up for themselves, to no longer be embarrassed and to get some help. We want to eradicate the notion of this behind a hidden subject; we want it to be dinner-table conversation, like breast cancer is and always will be. What we want to prevent is men who are too afraid to talk about their issues to the point where it could cost them their life.

There is a need to have this done and it be urgent. We need to be breaking down the barriers about going to the GP and asking about our lumps and bumps. Too many men are dying from secondary cancers caused by penile cancer due to the embarrassment of being misdiagnosed with an STD.

I am just lucky that after nine months of pushing my doctors they finally listened. If I hadn’t had been persistent, I wouldn’t be here to write this.