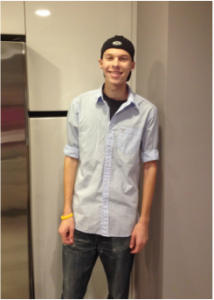 In May 2012, I was 18 and in my senior year of high school. I already applied to colleges and got accepted to many of them. The one I chose was Shippensburg University. I had just finished planning for my prom. In my friend group, I am usually the one who plans everything! Planning for this was enjoyable, but also a challenge. I already had the limo reserved, made the schedule, and was ready to have the time of my life; but little did I know that my life was going to change in an instant.

Testicular Cancer is one of the most common cancers in men between the ages of 15 to 35, yet there is almost no awareness of it.

About a week before my prom, I was at home, watching television and had a simple itch. That itch ended up being the most important itch of my entire life. I noticed something hard—something I did not remember feeling before. Clearly, something was not right. It is difficult to describe, but I had this gut feeling that it was something horrible. I went upstairs to my mom and told her. She said to try not to worry too much about it, but she would make a doctor’s appointment. Within a day or so, my mom and I went in for my doctor’s appointment. He checked me. Then, he said the words that I never thought I would hear: “YOU HAVE CANCER.” There was so much running through my head. I tried my best, but a couple of tears ran down my face anyway. Without knowing about this type of cancer, the first question I remember asking the doctor was, “How long do I have?” I started to remember random events in my life, from when I was a child, up until that moment. I wanted to cherish those memories because I feared there wouldn’t be many more.

Immediately, I had to start thinking about my treatment. After having an ultrasound and taking several blood tests, I met with my urologist, and he informed me that I needed to have surgery. I never had surgery before. I was terrified. I remember dreading that day!

The morning of my surgery, I went to the hospital, got checked in, and sat in the waiting room. My family was with me as well: my grandparents, mom, uncle, stepdad, and step-brother. It was amazing to have all the support that I had! Fortunately, the surgery did not take long, and I was able to come home later that same day.

After having my surgery, I thought that everything was okay, and my nightmare was finally over! It turned out that the worst had not even started. After taking various tests such as X-rays, CT scans, and more blood work, I found out that the cancer had spread. At this point, I had to think of further treatment.

I had to meet with many oncologists until I found the one that would be the best fit for me. The one I chose is phenomenal. He told my mom and me what would be happening and how to move further with my treatment. I needed to have nine weeks of chemotherapy. I could not believe it!

The first thing that I always think of when I hear the word “chemo” is hair loss. I could not imagine losing my hair. It is something that has always been very important to me, and everyone who knows me knows that. That was my biggest fear of the entire experience; well, in the beginning at least.
​
My first day of chemo was okay. I remember walking in, sitting in the chair, getting hooked up, and asking my mom, “This is it? Chemo won’t be hard!” I later found out that this statement would be far from the truth. Yeah, the first day was not terrible, but that was only the first day.

The entire chemo experience is something that will haunt me forever. I would go into chemo each day during the first week, one day the second week, and one day the third week. That was considered one cycle. My treatment consisted of three cycles.

On the first Friday of each cycle, I would throw up. This was now my biggest fear.

Towards the end of my chemo treatment, I needed to have an enormous amount of pricks from the IV needle each and every day I was there. I could be pricked up to 6 times on a bad day, but still usually around 2 or 3 times even on a good day. Unfortunately, this happened because after having chemo for so long, the nurses were not able to get a straight path with the needle, compared to before, for me to receive my treatment. I remember one day when I was sitting in the chair, the nurses were trying to get the needle in my arm for me to receive my treatment, and it was so bad that it must have been at least eight times! All I kept thinking to myself was, “Why me?” That day was the only day during the entire nine weeks that I cried, at my treatment facility at least. The only thing on my mind was going home and hoping to end this terrible nightmare.

All of the nurses at my treatment facility were wonderful; however, they actually couldn’t see me most of the time. Whenever I went into the chemo room, I would always put my hood from my sweatshirt over my head—far enough so that my entire head would not be visible. By doing this, it helped me so I would not be able to look around, which got me sick. Every time I would see an IV bag or a person in one of the chemo chairs, my stomach would start to hurt. I joked later, that if I went to visit the nurses after I had completed my treatment and was feeling better, they probably wouldn’t even remember me because they were never able to see my face!

The entire cancer experience has allowed me to meet many amazing and inspiring people. I was able to meet other cancer survivors, caregivers, and other people who were affected by cancer in some way.